Our Churches and Location 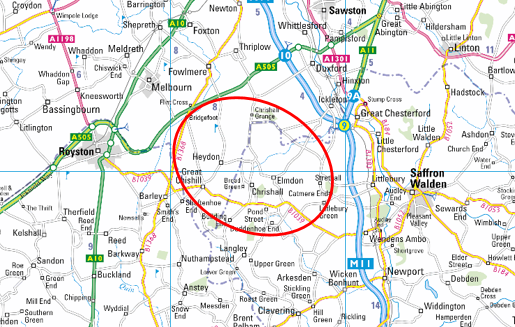 We are a rural community of seven village churches in the very north-west corner of the Chelmsford Diocese in the deanery of Saffron Walden.  The parish is close to Cambridge, sitting between the medieval market towns of Saffron Walden and Royston, with villages in both Essex and Cambridgeshire.  Our villages lie at the very centre of the Icknield Way, the oldest track in Britain, which dates from Neolithic times. 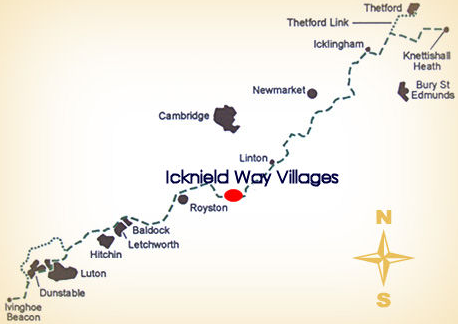 Situated opposite the Rectory, the church is built of flint and rubble, locally gathered, and set in mud or clay. It occupies a prominent position in the village, which is the highest point in Cambridgeshire, with wonderful views over the surrounding countryside. A major programme of restoration is currently getting underway, supported by a substantial grant from the lottery fund and energetic fund raising in the community. A group of volunteers helps to keep the churchyard looking beautiful. The church can accommodate approximately 220 people. It has a dedicated children’s area and a crèche area for babies and toddlers. The bells were restored and a new ringing platform installed in 1999. A group of villagers regularly ring the bells. 10.40 services are typically held here.
https://www.achurchnearyou.com/great-chishill-st-swithin/

The church is of 11th century origin. There is a Norman window on the north side of the chancel. The Crossman family who owned the nearby Cokenach estate restored the church about 1880, it has been in use ever since. Thanks to a hard working DCC the church is generally in good condition, there is no electricity, candles are used when required. The church has just received a substantial grant from the Listed Places of Worship Roof Grant scheme and work is underway to replace the roof of the nave. The churchyard is open and well-maintained. St Nicholas’ Church is a much loved, peaceful and happy place that holds a number of events such as a bring and share summer picnic. The Church seats about 80 people and BCP communion services are typically held here.
https://www.achurchnearyou.com/little-chishill-st-nicholas/

Heydon Church (1298) is a grade 2* listed building situated within Heydon village. It has notable stained glass and reredos, and is heated and well maintained. It is hoped to adapt the building to enable greater multi-purpose use. The capacity is about 160 of which 80 will be in the nave, and the pews (moveable) can have additional stackable chairs added. The simple servery is used for coffee after services and can cope with simple 'Harvest Supper' food, or buffets. BCP communion services are typically held here.
https://www.achurchnearyou.com/heydon-holy-trinity/

Holy Trinity stands proudly on the edge of Chrishall Village. It is the largest church in the parish, with a seating capacity of 240. It is a grade 1 listed building and is well endowed by the Brand Trust, but for fabric purposes only, one of whose trustees is the Incumbent. Although traces of its Norman origins are clearly visible in the tower arch, the bulk of the church was built in the 14th and 15th centuries. The building was extensively restored in 1869, with further major works over the last two decades and stands today in good physical condition. Recently toilet facilities and a kitchen area have been incorporated.

The church is fitted with wireless audio facilities including an induction loop hearing system. A new floor was recently laid throughout the body of the church with some pews being removed and replaced by chairs which allow far greater use of the building for worship, community and fund raising purposes. This should serve as an opportunity to raise income for the church, which struggles to support its share of general expenditure. In addition the church has on loan a copy of Rubens “Adoration of the Magi”. There are also three notable brasses relating to the de la Pole family. The churchyard is supported by volunteers from the community. 10.40 services are typically held here.
https://www.achurchnearyou.com/chrishall-holy-trinity/

St. Nicholas is our Parish Church. It is situated at the centre of its community and is reasonably large for what is now a fairly small village. The building is substantially in good order. The interior has been redecorated, and high quality lighting and a sound system, complete with induction loop, have been installed. The vestry is a good size and used for Youth group on Sundays. A study is underway into making the church building more user friendly for its community and for more general use. Re ordering of the church is

being actively considered. Meanwhile, a massive re-ordering of the churchyard has been undertaken and work continues including replacing the brick and flint wall along the boundary with the road. The Church, which suffers from a major bat problem, is cleaned by a group of volunteers affectionately known as “Elmdon’s MMMs” (Magnificent Marigold Maids) who meet the day before every service.  10.40 services are typically held here.
https://www.achurchnearyou.com/elmdon-st-nicholas/

This church dates back to 1610 when it was a tithe barn in a farm called Lantern Thatch. It was converted and consecrated on St. Peter’s Day 29th June 1859, following local fund raising. By 1990, the Church had fallen into disrepair and following considerable generosity from villages, it was possible to renovate it extensively. Seating around 80 people it is one of only two thatched churches in Essex. One of its unusual features is that the Lord’s Table is on the long (east) side of the church, with the pine pews arranged accordingly.

The church was re-thatched in 2010 and the porch roof repaired, funds having been raised through grants and donations from the residents of Duddenhoe End. We typically have monthly BCP communion services held here together with Harvest and Christmas Services. We hold a variety of fund raising events in the church, such as an Organ Recital, Flower arrangement demonstration and talks on a variety of subjects: i.e. Local history.
https://www.achurchnearyou.com/duddenhoe-end-the-hamlet-church/

Situated on the ancient Icknield Way the church building, which is Grade 1 listed, probably dates from around 1010. In 2010 we held a Millenium service led by the Bishop with music written for the occasion by John Rutter. Strethall underwent very substantial restoration a few years ago. Some funds are raised locally not least by the Friends of Strethall church, but significant funding has been received from English Heritage, The Historic Churches Preservation Trust and other grant giving bodies. The fund raising effort has encouraged an on-going series of high-profile events such as concerts, flower and art festivals. The building which is ½ a mile from the village and approached through a farmyard, has a normal seating capacity of around 40, although approaching 100 squeeze in for the annual carol service at Christmas. Many walkers and visitors to the Parish stop to pray in the church because of its exceptionally peaceful and tranquil environment. BCP communion services are typically held here.
https://www.achurchnearyou.com/strethall-st-mary-the-virgin/